We were high school sweethearts in small town Iowa, who married 6 years to the day after we started dating. 10 months later, baby Tori showed up, and Eve quit her catering/serving/bartending jobs to stay home and “Just” be mom. International Mission was always in our hearts, but we had no idea how God would make that happen, with just Ben’s lower management grocery store salary. Still, after a life-changing trip to the Philippines, we said “yes” to an invitation to join the Father in the tiny island nation of Malta. On faith and a prayer, with only His promise to take care of us, we sold everything, packed our family’s few remaining belongings into 6 suitcases, and took off eastward across the Atlantic. Our initial commitment was 2 years, given to a media ministry working in North Africa and the Middle East. Through challenging circumstances, a whole lot of good fruit was borne, and we learned a ton. It wasn’t until nearly 4 years and 1 beautiful Baby Elijah later that the Lord released us from that assignment, and invited us to expand the prayer and worship culture we had been cultivating “on the side”. We spent the next 5 years building a House of Prayer community: facilitating prayer and worship events, discipling people, and falling more deeply in love with God and those He loves. Annabelle joined our family during that time, and was bounced on hundreds of different knees as we sang and prayed our way through the scriptures, taught free English classes for refugees, and hosted innumerable guests and teams from around the world. Though our financial support level was never what it “should have been” on paper, we miraculously never went hungry (and we were never feeding just our family either). When Liliana Joy came along, we had 14 beds, slept 32 people, and were at full capacity for months on end. Something shifted then, though. Our sweet baby girl was born with severe physical challenges, and we needed to go to America for several months to get specialized medical treatment. 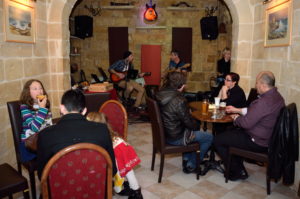 Upon our return to Malta, we knew the Father was inviting us into something different again. As we watched and listened, an unprecedented ministry design took shape. The Happy Hive was a “front room” of sorts to the prayer house. A music cafe, staffed by believing volunteers, we served delicious homemade food, drinks, and love-centered conversation to any who happened by. It was an instant hit, and within weeks we were overwhelmed by more human fruit than we could bear. Every time the doors opened, we would be asked about our faith, asked to pray for the sick, counsel the anxious, or answer a question about God. When the doors were closed, our growing team was asking to be discipled and trained. Live music, a family-friendly vibe, and wide open arms for everyone quickly made the Happy Hive one of the most popular places on the island. It was a smashing success from a ministry standpoint. However, in late 2015, it all came to a screeching halt when 2-year old Lili unexpectedly went home to Jesus. Reeling in shock, we buried her next to her great grandparents in Iowa, and knew it was time for our family to get some rest and healing. After 11 years in the Mediterranean, we packed up. This time, we carried a few more bags, a lot more wisdom, and an immeasurable load of grief back westward across the Atlantic. 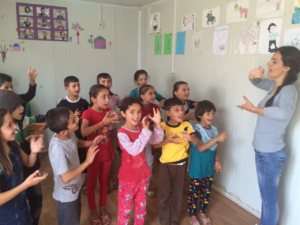 Upon landing in America, we spent three beautiful, healing months as a family in the mountains of North Georgia, before buying a house near cousins in Kissimmee, Florida. Our good Dad continued to provide for our needs through generous supporters and some video projects, including one which took Ben back to the Middle East. There, in a tiny village in Northern Iraq, he ran into a young Yazidi girl, and his heart was gripped by the plight of her people. Upon his return home, we spent several months asking God to heal this devastated people group, and to let us be a part. One year after Lili’s death, the Peace Lily Foundation was born in her honor: a not for profit organization dedicated to bringing hope among the hopeless. We took on a small Yazidi school (Oasis Of Hope) in the mountains of northern Iraq and saw the gospel begin to spread, and hearts begin to be healed. Our own family also received some healing in the form of a surprise gift: Arielle Hope. Around that time, God provided a day job at a local church for Ben, and for two years he served there—officially as the Director of Communications (unofficially as a culture-shaper, peacemaker, and home brew purveyor). During that time, we continued to follow His invitations to missional living locally & internationally: practicing radical hospitality, and taking trips and teams to Northern Iraq, Malta, and Scotland.
And we continued to dream…

The Dream:
Has a whole lot of new facets, but the heart of it is still just Him and His people. With fear and trembling, and a whole lot of excitement, we are following Him into the next big thing: a missional Brewery. Like the monastic communities of old, we are gathering a team, (or a family, really) of like-hearted, mission-minded people who are committed to prayer, worship, relationship, hospitality, and mission. For several years, Ben has been honing his skills as a brewer of fine beer, and some of his fans (including the Holy Spirit) have made it clear that it is time to move the Brew Pot out of our garage and into a bigger space. After what has felt like a long wait, we are suddenly seeing doors opened, and the faster we say “yes” to Him, the faster He seems to open them.
We are taking steps through as He leads… praying, researching, meeting with our team, establishing an LLC, preparing to purchase equipment, location-scouting, (planning our next mission trip to Malta in May) dreaming of where this might be going, and trusting Him to foot the bill for all of it.
The journey of trust is the most scary, intoxicating, addictive, thrilling, fulfilling, and peace-inducing experience on earth…
Who’s with us?!